The Truth About Trolls 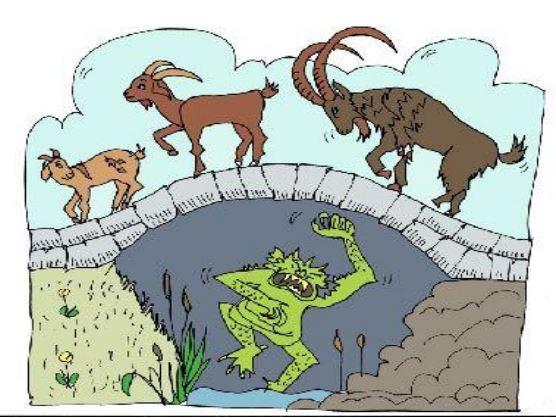 There are many stories that have trolls in them. Trolls, like dragons, giants and unicorns, have been talked and written about for hundreds of years. One very well-known story, I am sure you will know, is about a very angry troll that tried to stop goats going over a bridge to feed on the rich, green grass. But is this what all trolls are really like?

This unit of work is based on information written by Professor Folklore, an expert on Trolls from the University of Myth and Legend. He provides some basic information on these strange, often misunderstood mythical creatures. You can decide what you think maybe true and what needs more research to establish the truth. Professor Folklore needs other experts (like you!) to write more about trolls so that the ‘truth’ can be shared across the world. He wondered whether you could also become an expert on trolls.

During this unit you will be dreaming up some of your own interesting and amazing information to set the record straight. Are trolls just be known as nasty, mean creatures?

Lesson 1 - The Truth about Trolls

Start by reading the text by Professor Folklore below. You can also listen to it by clicking here https://soundcloud.com/talkforwriting/trolls/s-7815f2MesfN

Here is a glossary of some of the technical words used in the text, and some web links if you would like to find out more information.

erupt: the action that happens when a volcano spits out hot molten rock (magma) and gas – can cause terrible destruction

cave: Hole or space in rock big enough for a person to go into.

Now complete the table for other words in the Professor's text, writing your definition of what each one means.

Today we are going to investigate words and phrases that help us to write more interesting information texts.

Adjectives are used describe a noun.

For example: The tired, old man wandered over the busy road.

To make information writing interesting for the reader, you can add adjectives to describe different nouns. In ‘The Truth about Trolls’, the writer, Professor Folklore, has decided to describe the eyes, nose and teeth of the trolls using two adjectives.

These have been separated using a comma as this is a list.

Try and think of some interesting adjectives to describe different bits of a troll. Try to make your troll seem friendly or unfriendly. Copy these into your home learning book. 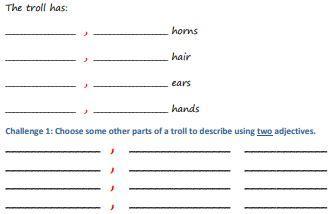 We're going to play some word games to help you practise your skills as an entertaining writing. If your audience like your writing, they will want to read other articles you write! Let's build on those adjective skills you learned yesterday.

You can see that 3 features have been used to help describe the troll, in Professor Folklore's writing:

The troll has beady eyes, a bulbous nose and yellow teeth.

Now use your nouns and adjectives from yesterday's lesson to write 3 new sentences of three descriptive phrases to describe your troll.

Now, use your creative skills to draw a picture of your troll and label it with all the descriptive features you listed yesterday. Don't forget to send me a photo of it!

Adverbs are roving reporters because they can move around sentences describing action or whole clauses. They tell you more about the how, where, when and why of everything. Let’s see some of the things that they can do.

Information texts have lots of ‘facts’ about a topic. It is helpful to have words that ‘add on’ facts for the reader and not just use and … and … and ... .

For example, in the ‘Truth about Trolls’, ‘In addition’ has been used as a sentence starter to ‘add on’ other things that trolls like to eat:

In addition, they gather large mushrooms and dig up juicy roots that grow in the forest.

You need to use a comma after 'In addition' when it is at the start of the sentence. Read the sentence above again out loud and change 'In addition' to 'Additionally', 'Also' or 'Furthermore'. These are other adverbs that help you add on information. What else do you think trolls might like to eat?

Write out a list of food in your home learning book. Try thinking about food you really like or dislike.

Next, write these items into sentences describing what trolls like to eat, and absolutely detest! You are the expert on trolls so you can decide what is right or wrong!

Now, go back through your sentences and use the 'add-on' adverbs to make the sentences even better.

Remember to check your sentences for capital letters at the start, commas after the adverb add-ons and full stops.

Yesterday, we learned about 'add-on' adverbs - ones that introduce extra information to the reader. Today we are going to use 'engaging' adverbs - these tell the reader you are going to tell them some juicy details!

In his writing, Professor Folklore used engaging adverbs. Here are some examples;

Interestingly, a few trolls do not have any horns at all.

Surprisingly, goats are not on the menu!

Try and think of something interesting, something surprising and something amazing about your trolls and use adverbs based on these emotions to introduce this information when you write your own engaging sentences. Remember to use a comma after the adverb at the start of the sentence.

Write one sentence for each of the engaging adverbs above.

We are going to dip our toes into the Year 3 curriculum!

Have a go at dropping extra information into a sentence using a relative clause that starts with who. In ‘The Truth about Trolls’, Professor Folklore first wrote:

One troll lived alone under a bridge.

Then he added in another bit of information using who.

One troll, who was very grumpy, lived alone under a wooden bridge.

What else could you ‘drop-in’ to tell the reader something else about the troll?

Use this sentence to drop-in extra information for the reader starting with who. Write it in your home learning book.

*Remember to use a comma before and after the dropped in information.*

Tip – use a different coloured pen for your drop-in information.

Can you write three more sentences of your own using a relative cause drop in?